It’s in the genes: reactions to dental amalgam mercury 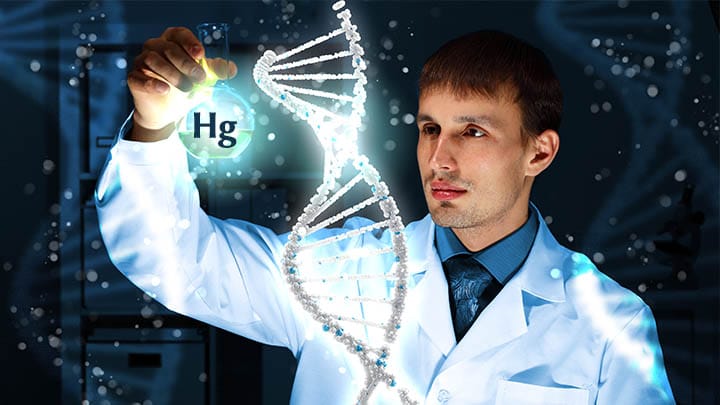 Evaluating a person’s genetic traits as a risk for certain diseases is being practiced more and more often, sometimes even at the request of the patient. While some sectors of the healthcare community and general public have not yet embraced the concept of genetic susceptibility, science is, in fact, showing that particular issues with mercury can be traced to genetic traits.[1]

For example, researchers have associated neurobehavioral consequences from mercury exposure via dental amalgam (silver) fillings with a specific genetic polymorphism. Moreover, the researchers of a study published in 2006 linked the polymorphism CPOX4 (coproporphyrinogen oxidase, exon 4) to decreased visuomotor speed and indicators of depression in dental professionals.[2]

Furthermore, the CPOX4 genetic variation was identified as a factor for neurobehavioral issues in a study of children with dental amalgams. The researchers noted, “…among boys, numerous significant interaction effects between CPOX4 and Hg [mercury] were observed spanning all 5 domains of neurobehavioral performance…These findings are the first to demonstrate genetic susceptibility to the adverse neurobehavioral effects of Hg [mercury] exposure in children.”[3]

The ability of these specific genetic variants to negatively impact the body’s reaction to dental mercury exposure has even achieved attention in the mainstream media. A January 5, 2016, article by Greg Gordon of McClatchy News included interviews with some of the researchers of the studies mentioned above. Markedly, Dr. James Woods stated: “‘Twenty-five percent to 50 percent of people have these (genetic variants).’”[4] In the same article, Dr. Diana Echeverria discussed “a lifetime risk” of neurological damage related to this population, and she elaborated: “‘We’re not talking about a small risk.’”[5]

Another area of genetic susceptibility in relation to dental mercury risk that has merited attention is the APOE4 (Apo-lipoprotein E4) genetic variation. A 2006 study found a correlation between individuals with APOE4 and chronic mercury toxicity.[6] The same study found that removal of dental amalgam fillings resulted in “significant symptom reduction,” and one of the symptoms listed was memory loss. The symptom of memory loss is quite interesting, as APOE4 has also been associated with a higher risk for Alzheimer’s disease. [7] [8] [9]

Importantly, the authors of a study which found a connection between the number of mercury fillings and neurotoxic effects for those with APOE genotype explained: “APO-E genotyping warrants investigation as a clinically useful biomarker for those at increased risk of neuropathology, including AD [Alzheimer’s disease], when subjected to long-term mercury exposures…An opportunity could now exist for primary health practitioners to help identify those at greater risk and possibly forestall subsequent neurological deterioration.”[10] Researchers have also noted, “The increased AD [Alzheimer’s disease] risk through APO E4 might be caused by its reduced ability to bind heavy metals. Latest therapeutic approaches to the treatment of Alzheimer disease embrace pharmaceuticals which remove or bind metals from the brain.”[11]

Other than CPOX4 and APOE, genetic traits that have been examined for association with health impairments caused by mercury exposure include BDNF (brain-derived neurotropic factor),[12] [13] [14] metallothionein (MT) polymorphisms, [15] [16] catechol-O-methyltransferase (COMT) variants,[17] and MTHFR mutations and PON1 variants.[18] The authors of one of these studies concluded: “It is possible that elemental mercury may follow the history of lead, eventually being considered a neurotoxin at extremely low levels.”[19]

Research has additionally shown that dental mercury fillings can potentially play a role in immune system problems for genetically predisposed patients. Studies have confirmed that genetic susceptibility to reactions from dental mercury can be related to chronic fatigue syndrome,[20] and multiple sclerosis, rheumatoid arthritis, and amyotrophic lateral sclerosis.[21] Furthermore, scientific data has linked mercury and genetic traits to autism spectrum disorders,[22] [23] chemical sensitivities,[24] and Kawasaki’s disease,[25] and research has also suggested that genetic transporters could be involved in the toxicokinetics of mercury.[26]

One of the most promising aspects of such multi-factorial research in relation to health risks from dental mercury is that this perspective offers science an opportunity to re-evaluate many diseases that are currently not well understood. It also demonstrates that research which fails to account for genetic susceptibility is missing a major piece of the puzzle required to accurately assess health risks, prevention, treatment, and potential cures.